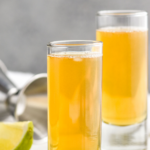 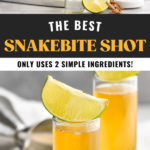 The snakebite shot is made with Yukon Jack and lime cordial. A tart twist on a classic whiskey shot, this two-ingredient potent shooter is packed with unforgettable flavor. The “venomous” bite of this shot is sure to make you pucker!

The sweet flavor of Yukon Jack combined with sweetened yet tart Rose’s lime cordial provides a unique and intense shooter. This snake bite won’t kill you, but it is definitely a shot you won’t forget!

Is Yukon Jack a whiskey?

Yukon Jack is actually a liqueur, made from Canadian whiskey and honey. Due to the honey, it is much sweeter than straight whiskey. It is known as the “Black Sheep of Canadian liqueurs.”

How to Make a Snakebite Shot

Serve your snake bites in shot glasses with a lime wedge. This shot has a high alcohol content so enjoy responsibly.

While the Yukon Jack snakebite is a popular shot here in the US, the snakebite drink also makes a popular appearance. Made with half Lager and half cider, the layered drink served in a pint glass has a much milder taste that is quite popular in the UK.

Is lime cordial the same as lime juice?

Lime cordial is a drink mixer made with lime juice, sugar, and water. Sweeter than straight lime juice, you can buy a bottle at the store or make your own.

Can I use a different whiskey?

This recipe specifically calls for Yukon Jack, but you can swap it out for the whiskey of your choice. Know that the flavor of the shot will change due to a lack of sweetness of the honey in the Yukon Jack.

Does it have to be shaken?

If you choose not to shake your snake bite ingredients with ice and would rather just add them to a shot glass, know that the shot will be more potent because it won’t be diluted at all.

Serves: 1 shot
(tap # to scale)
Prep: 3 minutes
The snakebite shot is made with Yukon Jack and lime cordial. This two-ingredient potent shooter is packed with unforgettable flavor.
Print Pin It Rate 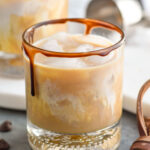